Arby's was founded in 1964, but the concept for a roast beef sandwich franchise was rooted many years earlier. Forrest Raffel, a graduate of Cornell University School of Hotel and Restaurant Administration, and his younger brother Leroy, a graduate of Wharton School of Finance, University of Pennsylvania, bought an uncle's restaurant equipment business in the 1950s. Raffel Brothers, Inc. became a fitting introduction to the foodservice industry, and the small company rapidly grew to become one of the country's leading foodservice consulting companies. Raffel Brothers, Inc. designed and installed hundreds of foodservice facilities including the flight kitchens at Greater Pittsburgh International Airport, interiors of six Ohio Turnpike restaurants and foodservice facilities for the Hospitality Inn motel chain for Standard Oil of Ohio. But the Raffel brothers also quickly sensed the potential of fast food and decided to develop a franchise operation based on something other than hamburgers. Leroy remembers, "We were totally confident, while everyone else thought we were out of our minds." The idea was born. The only kink in the chain's orderly development came with choosing a name for it. The partners wanted to use the name "Big Tex," but were unsuccessful in negotiating with the Akron businessman who was already using the name. So, in the words of Forrest, "We came up with Arby's, which stands for R.B., the initials of Raffel Brothers, although I guess customers might think the initials stand for roast beef." The first Arby's restaurant opened in Boardman, Ohio, on July 23, 1964, serving only roast beef sandwiches, potato chips, and a beverage. It was the only Arby's restaurant for a year as the brothers refined the operation. One year later, the first Arby's licensee opened a restaurant in Akron, Ohio. Today, more than 450 licensees operate more than 3,400 restaurants worldwide. 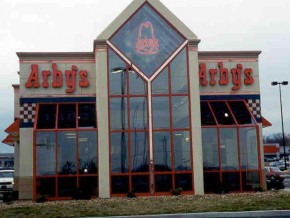