Arby's was founded in 1964, but the concept for a roast beef sandwich franchise was rooted many years earlier. Forrest Raffel, a graduate of Cornell University School of Hotel and Restaurant Administration and his younger brother Leroy, a graduate of Wharton School of Finance, University of Pennsylvania, bought an uncle's restaurant equipment business in the 1950s. A late-night excursion to a small Boston sandwich shop one rainy Halloween was the inspiration for the Raffels, who joined a damp, but determined huddle of patrons to await the main attraction -- a 79-cent roast beef sandwich.

The first Arby's restaurant opened in Boardman, Ohio, on July 23, 1964, serving only roast beef sandwiches, potato chips, and a beverage, and was the only Arby's® restaurant for a year as the brothers refined the operation. One year later, the first Arby's licensee opened a restaurant in Akron, Ohio. Today, more than 500 licensees operate more than 3,000 restaurants worldwide. 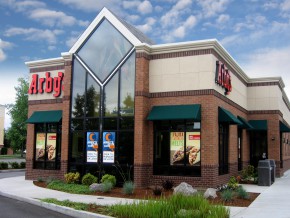