Arby's was founded in 1964, but the concept for a roast beef sandwich franchise was rooted many years earlier. Forrest Raffel, a graduate of Cornell University School of Hotel and Restaurant Administration and his younger brother Leroy, a graduate of Wharton School of Finance, University of Pennsylvania, bought an uncle's restaurant equipment business in the 1950s. A late-night excursion to a small Boston sandwich shop one rainy Halloween was the inspiration for the Raffels, who joined a damp, but determined huddle of patrons to await the main attraction -- a 79-cent roast beef sandwich. The idea was born. The only kink in the chain's orderly development came with choosing a name for it. The partners wanted to use the name "Big Tex," but were unsuccessful in negotiating with the Akron businessman who was already using the name. So, in the words of Forrest, "We came up with Arby's, which stands for R.B., the initials of Raffel Brothers, although I guess customers might think the initials stand for roast beef." The first Arby's restaurant opened in Boardman, Ohio, on July 23, 1964, serving only roast beef sandwiches, potato chips, and a beverage, and was the only Arby's® restaurant for a year as the brothers refined the operation. One year later, the first Arby's licensee opened a restaurant in Akron, Ohio. Today, more than 500 licensees operate more than 3,000 restaurants worldwide. 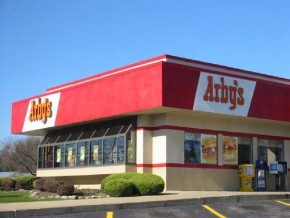