TBTC Inc. is part of an 83-year-old family legacy that began on Dec. 26, 1919 when Fred Phillips Sr. became a Texaco agent and began selling kerosene from a rail car in McAllen, Texas. He became the consignee for the cities of McAllen, Pharr and Hidalgo, serving both farmers and service station dealers as a wholesale representative of Texaco, then known as The Texas Company. His son, F. P. Phillips Jr., succeeded him as consignee in 1952 and the company grew to be one of the largest Texaco wholesalers in the Rio Grande Valley. Fred Phillips Sr. passed away in 1972, and in 1976 the company was incorporated as Phillips Products Inc. In the late 1970s, two sons of F. P. Phillips Jr. joined the business, Joe and Tom. By the early 1980s, the company began focusing on Conoco products and added Exxon to the stable in 1990. Affiliation with Texaco ended in 1983. The company entered the retail business in the early 1980s and Joe Phillips succeeded his father as president. By 1993, the company had developed a chain of approximately 15 convenience stores and truck stops. That same year, it also became a Burger King franchisee. Fred Phillips Jr. passed away in 1993, and Joe Phillips continued as president with Tom Phillips serving as executive vice president. 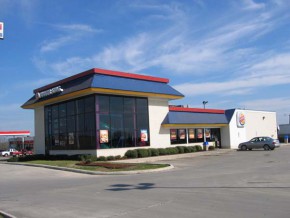