The Sekulovski Group, in conjunction with Red Turtle Realty, has been retained by ownership to sell the 100% fee simple interest of IHOP. Located in Forest Park, OH, the site at a busy retail corridor on the north side of downtown Cincinnati. The IHOP is situated across the street from the 1.5 million square foot Cincinnati Mall that is anchored by Kohl’s, Bass Pro, Burlington Coat Factory, and Babies “R” Us.

IHOP, formerly known as The International House of Pancakes, is a United States–based restaurant chain that specializes in breakfast foods. It is owned by DineEquity, with 99% of the restaurants run by independent franchisees.
The appellation "International" has always referred to the fact that the chain offers different styles of pancake from around the world, although it had no actual international presence beyond its 1,550+ locations across the Americas until August 2012, when it opened its first franchise in Dubai as part of a major expansion into the Middle East restaurant market. 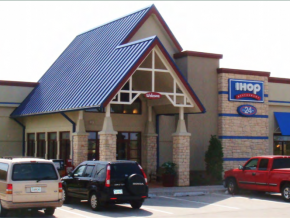