Taco Bell operates under the name "Taco Bell" and specializes in Mexican style in Mexican style food products, including various types of tacos and burritos, salads, nachos and other related items. The first Taco Bell restaurant was opened in 1962 by Glen Bell in Downey, Californian, and in 1964 the first Taco Bell franchise was sold. By 1978, when PepsiCo acquired it, the Taco Bell system had grown to approximately 1,000 units.
By year-end 1996, there were more than 6,800 Taco Bell units in 17 countries and territories, with system-wide sales of $4.7 billion. 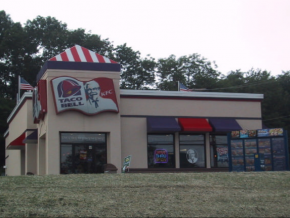